The Saturday mornng junior tennis programme is now back up and running.

Coaching continues to be available to current and new members on a private basis.

For details please contact us via the following links.....

We look forward to meeting you. 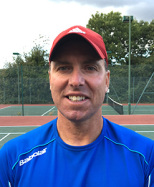 George has over 25 years’ experience coaching all levels of players. He has been Head coach here at Selsdon Tennis Club over the same period as well as holding Head coach roles at various venues across Surrey and Kent at different times, whilst successfully managing and running a team of

coaches, coaching at multiple clubs and venues throughout parts of Surrey and Kent, alongside running a club pro

shop supplying and selling all sorts of tennis related merchandise.

During this time he ran a Tandridge wide community tennis scheme at various venues such as schools and parks offering opportunities to play and receive coaching for juniors and adults across the Tandridge district. The scheme also provided for those with various disabilities to play tennis including wheelchair tennis as well as tennis for

special needs players. The scheme was very successful and attracted coverage from the national tennis press. It also benefited from the support of ex British number one Mark Cox who was commentating for the BBC at that time, by way of a series of clinics that George and Mark conducted across the district on a very busy and carefully

coordinated day, where tennis coaching was provided free to all the many people who turned up at each venue, with the support and coverage of the local press.

George was also team coach for the Sutton borough junior tennis squad and a member of the LTA pool of coaches, coaching at main events during the grass court season, like the Beckenham tournament and also Wimbledon, when on the middle Saturday he had the opportunity to coach local children alongside various ATP players who were competing at Wimbledon.

He also has a track record helping players to become coaches as well as training and mentoring various coaches over the years and has a keen interest in sports and performance psychology and has studied nutrition at the Institute of Optimum Nutrition.

George is a qualified and experienced stringer, although these days seldom has the time available to string for members.

George’s ethos and philosophy is simply; “no one knows how good you can be” and his focus is always on, fulfilling the potential in you, to be the best you can be, at any level. George believes that the tennis court is somewhere we can learn and cultivate many skills, not just for tennis, but also for life.

Lynda has been coaching at Selsdon Tennis Club since 2007.

Tots Tennis, and Adult Beginners and Improvers, are her current focus. An all-inclusive, relaxed and encouraging atmosphere is always her first aim when introducing, or reintroducing, players to tennis. Lynda attends regular Coach Professional Development courses to keep up to date with the latest ideas and approaches in coaching.

For membership enquiries and further information please do...